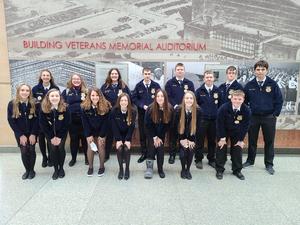 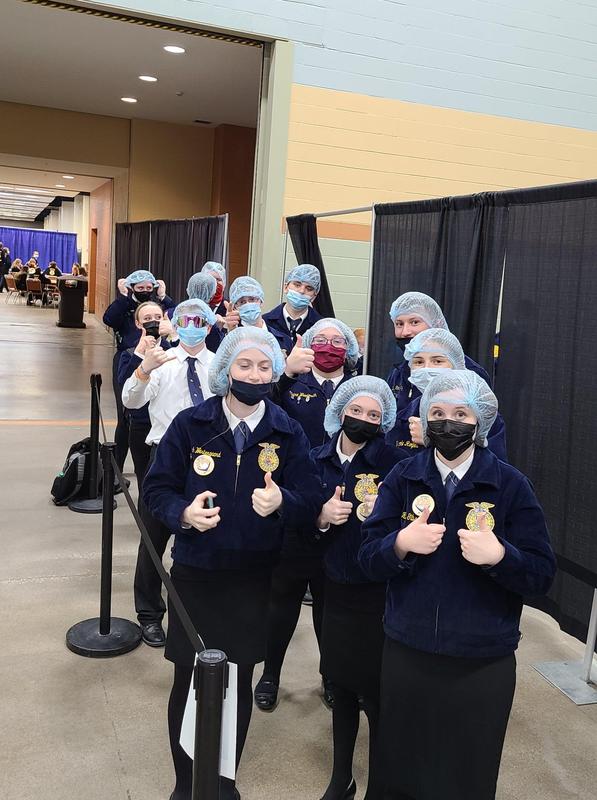 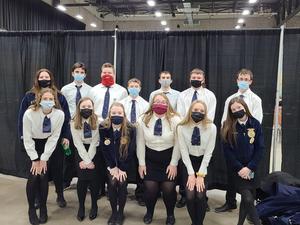 What a Convention! Panorama had an amazing group of students attend and compete on both days. 16 members traveled to Des Moines on Monday and Tuesday.
On Sunday, Keira Simmons set up her Chapter Display over our Ag in the Classroom project of Hydroponics in the Preschool Classroom. She received a Silver rating.
Monday Meredith Woodworth and Brock Hays represented the chapter serving as delegates for the Business session electing new State Officers.
The chapter also participated in the Meals from the Heartland meal packing event packing 796 meals in 22 boxes in an hour.
Riley and Reagan Gibson continued their journey the started at Sub-District contest in January. Riley competed against 18 other freshmen in the Creed Speaking event and Received a Silver rating. Reagan competed in the Individual Ag Sales contest against 12 members from across the state receiving a Gold rating and Placing 1st place in the State.
Tuesday had a flurry of activity as 13 members competed in 4 different contests. Brock and Meredith took the Greenhand exam receiving Silver and Bronze ratings respectively. Sarah Kastner, Dylan Ford, and Sarah Westergaard took the Farm Business Management test and received a Silver Rating. Miles Halling, Kaidyn Dencklau, Kylie Doran, and Weston Ploeger competed in Poultry Evaluation receiving a Silver rating. Claire Woodworth, Seth Hays, Paul Hansen, and Abbi Holloway competed in the Team Ag Sales event receiving a Silver rating. Claire and Reagan also participated in the Teach AgEd Signing day which is a ceremonial event signing letters of intent to study Agricultural Education in college. Reagan also had her interview as one of the 6 state finalists in the Stars Over Iowa in the area of Agriscience. Paul Hansen, Reagan Gibson, and Jaden Johnson were also recognized for earning their State FFA Degrees.
In between all that we were able to attend workshops and general sessions listening to speakers including Secretary of Ag Mike Niag, Governor Kim Reynolds, and National FFA Officer Anna Mathis. We were all grateful to have this event in person again and appreciate all the hard work that went into planning and carrying out this event by the State staff and Officers!