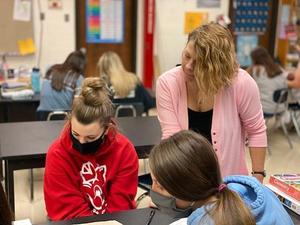 "I grew up on a farm in North English, IA (English Valleys High Community School District). I attended Iowa State University for Undergraduate and Graduate School with a little DMACC and Simpson courses as well."
"I participated in Cross Country, Basketball, Golf, Individual Speech, NHS, and Model United Nations in high school. During college I was raising a family and coaching youth soccer and basketball, so no time to do anything but study.

"
"I am married to Jeff Cobb, who also grew up in North English, IA. and currently works at Guthrie County Hospital. We have four kids, three boys, who have graduated from Panorama High School: Josh, 2012, Reid, 2016, and Trey 2019, and a daughter, Abby, who is currently a senior."
"I teach Chemistry, Physical Science, 7th Grade Panther Ready. In the spring I will teach Physics and ACT Prep, as well."
"When Jeff and I were first married, we lived a year in Dallas, Tx and then Rapid City, SD. While living in Rapid City, we were frequent mountain bikers, which was awesome, and visited Mount Rushmore at least 20 times with every friend or family member who visited!! I still love working out, just not the same opportunity to mountain bike. I also love watching football with my family, especially the New England Patriots and Iowa Hawkeyes (even though I went to Iowa State. You just can't take the Hawk out of an Eastern Iowa girl)." --Mrs. Cobb